I remember that there was a point in time when I thought I really knew what I was doing as a coach.⁠⠀
⁠⠀
Then I took the CF-L2 in 2014, and received feedback from someone who was seasoned, and had spent a lot of time problem solving. I very quickly realized that I was not anywhere near as good as I thought I was. But, I was given direction, and a way to improve. I took notes, and worked to implement the feedback.⁠⠀
⁠⠀
Eventually, after several thousand hours of coaching, opening a business, finding success, and a few years later, I was in a similar place. “I’m really getting this down!” I remember thinking…⁠⠀
⁠⠀
And then I received feedback from, yet again, someone who was better than me. Nope. Not there yet! But, I was given direction, and I practiced and worked with the feedback.⁠ I now ensure that I get feedback regularly – I’m headed to Michigan in a few weeks to do just that!⁠⠀
⁠⠀
Often, when clients are appreciative of you, and you’re in your own gym all the time, you develop a bit of an echo chamber of how good you are as a coach, and you grow complacent.⁠ ⁠⠀
⁠⠀
Just like how every coach wants a client who shows up, takes initiative, and never settles – every client wants a coach who does them same. So go find someone who is better than you, and go get feedback. Let the walls come down, be vulnerable, and be hungry for growth.⁠⠀
⁠⠀
Conveniently (wink wink), I’m hosting regular workshops at my gym for coaches to improve and receive feedback! The next one is Sat. Feb. 22nd – If you’re a coach and you can make it, I’d love to have you. If you can’t make it but you want to make it down the road, I want to hear from you. Click the link below to find out more! 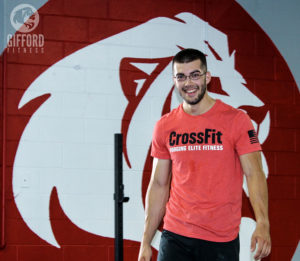 Nick Gifford (CF-L3)Author
Nick Gifford, Head Coach and Owner of Gifford Fitness, CrossFit Red Lion and Gifford Barbell has coached over 3000 athletes since 2012. He has worked with athletes from all walks and stages of life, focusing on health and wellness, balance, and pursuing excellence.
2020-01-23T17:16:04+00:00January 23rd, 2020|Coaches|